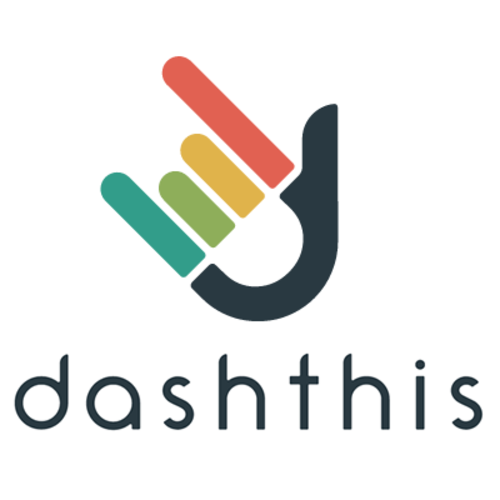 DashThis helps digital marketers and agencies from all around the world create awesomely beautiful automated marketing reports
in the blink of an eye. 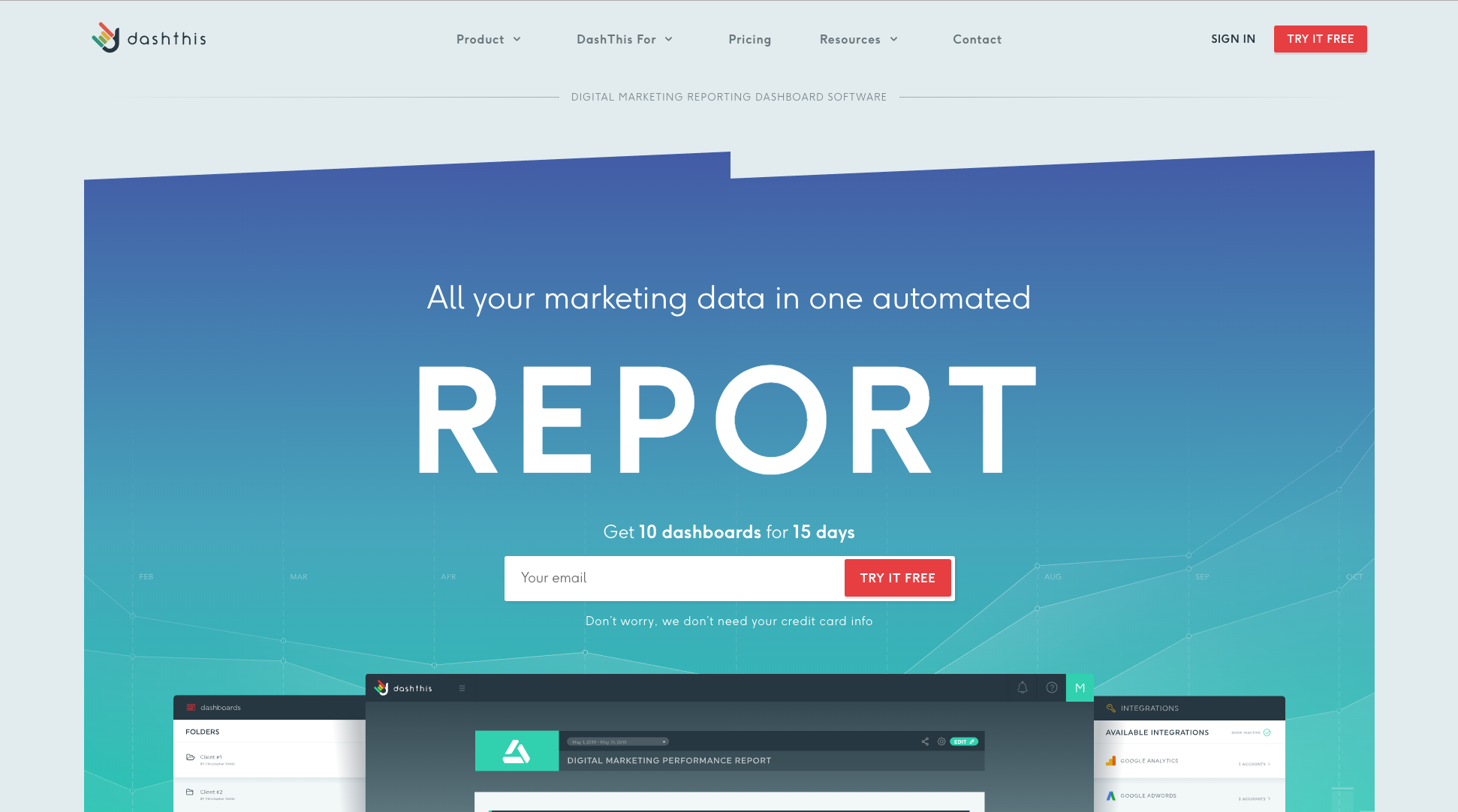 After using Hotjar for only 10 months, DashThis has:

DashThis enables marketers to create beautiful automated marketing reports thanks to their easy-to-use reporting software and second-to-none customer support. With DashThis, marketers can create marketing dashboards easily and share them with their team and clients automatically. They can include data from all their digital marketing tools such as Google Analytics, AdWords, Facebook, LinkedIn, and a lot more, into one beautiful dashboard. DashThis is a SaaS (a software-as-a-service company), and they take the “service” part of their job as seriously as the “software” part. Users matter more to them than anything else.

It goes without saying that easy-to-use software has to be user-friendly! And to always be as user-friendly as possible, DashThis’ team needed to know what their users are experiencing on a daily basis; and they chose Hotjar to help. 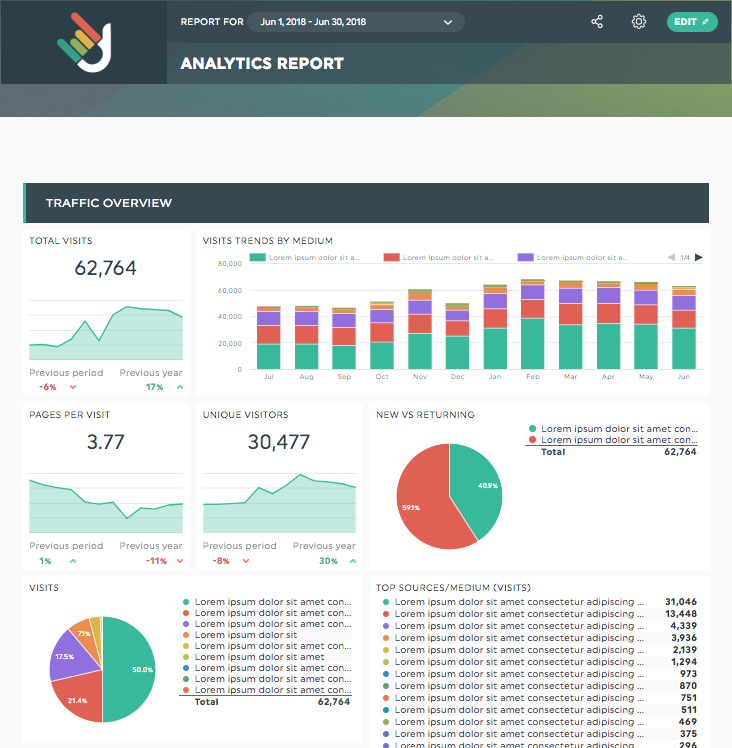 Optimal UX and the development of new features are both priorities for DashThis’ software product. The team at DashThis always has a ton of ideas and theories as to what should be the next software element to be upgraded. However, these are all just theories unless there is data to back them up and users to test features. At first, the DashThis team was working by instinct, accompanied by occasional user feedback. However, the of a handful of users isn’t necessarily enough to start a new project or change the entire software.

One of the particular challenges DashThis was facing was the onboarding process. When a user starts a free trial, it’s important that (s)he learns how to use the tool as quickly and easily as possible. The first two steps of the onboarding funnel (adding an integration and a data source) seemed way harder to complete than the others.

These are crucial because to use a reporting tool like DashThis, users have to connect their marketing data by adding an integration and a source. Without data to display, their marketing dashboard would be empty, and therefore useless. About 60% of users encountered some sort of difficulty in the first step, and many of them never even completed it. Since they were unable to add their data, they couldn’t use the tool at all!

What specific difficulties did they encounter that stopped them from completing these first two steps? If the user was having difficulties understanding how to use the tool, something had to be done.

DashThis’ lead UX developer, Astrid, wanted to know every user’s opinion of the tool, what they liked, and what bothered them. But can one single person gather the feedback of thousands of users around the world? It was an impossible task. She tried everything she could: talking to clients for and gathering all their opinions and struggles. But users thoughts and feedback aren’t always sufficient enough. Not only do you get half the story, but it lacks context: you never know what really happened before a problem occurred. DashThis needed more objective feedback and user information in order to create an ever-better tool.

Using Hotjar, DashThis’ UX team was able to find several small tweaks that could be done in order to help the user navigate through the app.

After having where users encountered roadblocks during the onboarding process, DashThis’ UX team discovered that users simply didn’t know where to click in order to add integrations. Buttons were not displayed in bold enough , and on some smaller screen resolutions, they were completely hidden at the bottom of the page. The list of 30+ integrations itself was also a it was not displayed in a way that made sense to the user. To fix these problems, the team modified the layout of the list, added a search bar, and incorporated pop-ups, videos, and different types of content to guide the user step-by-step. The buttons were also modified to be bigger and and to accommodate those with a smaller screen resolution, buttons were added higher in the page. Astrid also simplified a lot of other existing features in order to make the onboarding process easier for users.

As a result, the completion of the onboarding funnel has increased by a whopping 50% in just a couple of months. The first step alone saw its completion increase by 25%. DashThis’ users are overall a lot more satisfied with the tool and give tons of positive feedback. As a matter of fact, since using Hotjar, DashThis saw a 140% increase in customer satisfaction, according to the Net Promoter Score survey sent out at the end of the free trial period. However, even when negative feedback is received, it is now easier than ever to see what to do to fix it, and thus improve the user’s experience day after day.

Now, Astrid analyses Hotjar every single week; every Friday, she analyses the users’ on the tool and tries to detect new improvement possibilities. Not only that, but she can now verify all the team’s theories and find efficient solutions to issues. Whenever DashThis’ account managers have feedback from someone who didn’t like or understand some part of the tool, Astrid uses Hotjar to determine if this is a recurring problem amongst other users, and what to do next to solve this.

This is how Hotjar enables DashThis to become the best marketing reporting tool around!

Want to see how Hotjar can help you optimize your website for growth?

Sign up to Hotjar and start making crucial changes today.
TRY IT FOR FREE