Net Promoter Score benchmarks and customer loyalty: what is a good NPS?

If you use Net Promoter Score (NPS) as a metric for understanding how people feel about your brand, or even if you’re just thinking about using it, you may be wondering: what constitutes a good NPS? And how can you use this information to improve your customer experience and stand out in your industry?

We asked these questions to Rob Markey, co-author with Fred Reichheld (the inventor of NPS) of The Ultimate Question 2.0: How Net Promoter Companies Thrive in a Customer-Driven World—this chapter is based on a transcript of our interview with him.

Set up your NPS survey today

Sign up for a free forever Hotjar account, set up an NPS survey, and uncover insights that help you grow your business. 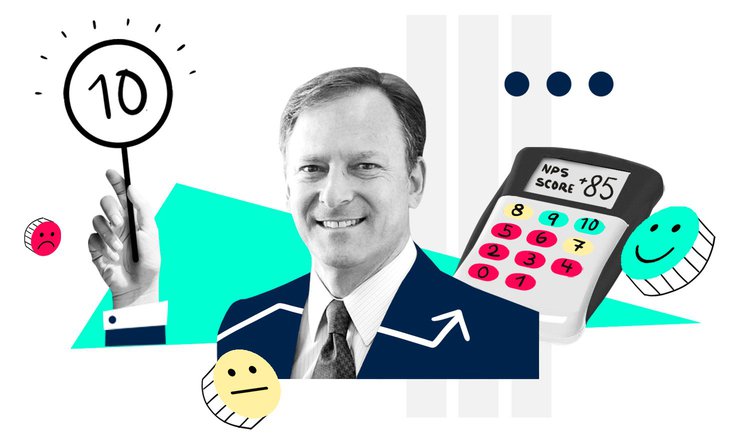 For the unfamiliar, a quick reminder on NPS . . .

Net Promoter Score (NPS) is a customer loyalty score, ranging from -100 to 100, calculated by asking customers one question: “On a scale from 0 to 10, how likely are you to recommend this product/company to a friend or colleague?”

As a business metric, NPS helps companies of all sizes organize around a mission-critical goal—increase their score by earning more enthusiastic customers—that can be easily tracked and quantified over time.

What is a good NPS (generally speaking)?

Net Promoter Scores range from -100 to +100, and what is considered ‘good,’ ‘bad,’ or ‘neutral’ can vary greatly across industries. Some count a positive score (i.e. any score over 0) as good, since it shows some customer loyalty and customer satisfaction.

That said, if an NPS survey is conducted by independent researchers—using strict, scientific sampling methods—a score of 60 or higher is generally a very good NPS in any industry.

‘Good’ and ‘bad’ are relative in NPS

A score of 60+ is generally very good, and negative scores are unequivocally bad (since they mean you have more detractors than promoters), but what about everything in between? Well, it’s complicated.

Having spent decades working with international brands and studying NPS data, Markey can confidently say the following: “your absolute score—your raw NPS alone—does not correlate very well with expected revenue growth. Your position relative to your competitors (within your industry, country, and regulatory environment) really makes the difference.”

Even though Company A has the lower NPS, its position as the #1 recommended company within its competitive set will confer all sorts of benefits that Company B isn’t likely to experience.

Why does being #1 offer such an advantage?

According to Markey, being the most recommended company within your competitive set means:

All this helps create a healthier working environment, and the ripple effect can lead to greater revenue growth over time.

Since relative NPS ranking matters more than absolute NPS, it’s important to consider where you rank within your industry. Find your industry average and compare Net Promoter Score benchmarks, but keep in mind that other factors (such as the country and its regulatory environment) will impact these benchmarks even further.

One of the most recent benchmarks studies is from 2018, when Bain measured the NPS of more than a dozen industries in the US and selected other countries including retail, banking, insurance and telecommunications—therefore, these benchmarks might work extremely well if you are a US-based company but not apply in the same straightforward way if your business is located elsewhere:

Average Net Promoter Scores vary between industries and countries. Once again, this is why you should always take ‘NPS benchmarks’ with a pinch of salt and understand when they do, or don’t, make sense for your business. In our interview, Rob Markey mentioned at least four factors that affect NPS benchmarks—and one that doesn’t:

1. Accumulated experience and skill in a given industry

Companies are always looking for new ways to serve their customers and make them happy; innovation, experience, and expertise can actually play a big role in NPS benchmarks. Whenever an industry leader makes a breakthrough in some area, its competitors either follow or never recover.

Video rental stores used to dominate the video rental market, but people hated the late fees that were the industry standard. Then along came Netflix, which eliminated late fees by switching to a subscription basis and allowing people to hold onto a DVD as long as they wanted. This transformed the industry.

Entire industries can take a hit due to factors beyond their control: Net Promoter Scores can change based on economics, politics, and current events.

An example would be in financial services: when the stock market drops, investment management firms experience a decline in their NPS. People are just less satisfied with the returns they're getting across the board, and that's an exogenous force that has an impact on people’s scores.

Supply and demand within a given region or country can play a big role in NPS. If there are more competitors who are more actively fighting for the same customers, then typically this is an industry where more emphasis gets put on earning relationships with customers.

Regulatory environments within a country can shape the basis of competition for entire industries.

Example: prior to the 1970s, US banking regulations fragmented the industry and prevented mergers. When the laws changed in the ’70s and ’80s, the primary basis of competition began to be rooted in mergers and acquisitions—aside from a few outliers, banks put little time and energy into earning customer loyalty, which in turn impacted their customers’ willingness to recommend them.

Note: cultural differences are not a factor

Based on hundreds of thousands, if not millions of observations across 20 years of Bain’s experience with its clients, Markey knows that “different cultures use responses scales differently, but this is a fact that most people overplay, most people overestimate.”

What does this mean, practically? If you work in a multinational organization and see that the scores from France are lower than the ones from Canada, the discrepancy is probably because the business is underperforming in France and French customers are unhappy, rather than because Canadian customers are on average ‘nicer’ when they give out scores.

4 steps to get a higher NPS score

As a score, NPS is a useful way of understanding whether or not your business is improving, and where it stands versus the competition. But knowing what customers think of your company or where you rank means little unless it inspires action and helps you improve.

At the end of our conversation, Rob Markey recommended taking the following steps (based on the Net Promoter System) to dig deeper into the data and improve your customer experience—and your score as a result

1. Ask four questions (not one)

Many people think Net Promoter is just about the standard ‘How likely are you to recommend this product/company to a friend or colleague?’ NPS question, but that formula alone won’t help you improve. Instead, always follow up with:

Note: questions 2 and 3 are reserved for NPS surveys conducted at a specific stage in the customer journey (e.g., after finishing a customer support call).

Engage your unhappy customers in a dialogue. Have a manager call them up to discuss their experience and really get them talking. This gives you a chance to:

The customer may have an issue with the employee who served them or a problem with specific company policies. Whatever the case, the conversation will give you valuable insight and help you figure out how to move forward.

In order to improve and meet your goals, you need to have high-velocity learning and action improvement mechanisms in your organization.

When customers raise legitimate concerns, use that information to help your front-line employees understand how these impact the customers, and what changes can be made so the overall customer experience improves.

When a customer complains about company policy, there’s no need to commit to changing the policy then and there. Often, customers find it helpful if you offer to take their complaints to those responsible for the policy—this lets people know that you take their complaint seriously, and gives the decision-makers at your company insight into the customer experience.

And of course, if they decide the policy really doesn’t make sense, they can change it.